Diaspora is 3 weeks away from unveiling its Open-Source Facebook alternative.

Would this Facebook alternative interest you? Goes without saying we usually go where our friends are but do you ever see yourself bailing on Facebook?

via THE open-source alternative.

When Facebook dares to change it’s design (not features) but its physical design, millions of people get in a twist about it.

People organize by setting up Facebook Pages dedicated to expressing their disgust and hatred because Facebook dare move a button.  Not to mention the thousands of Status Updates where users publicly threaten to delete their accounts if Facebook doesn’t put the site back to the previous design.

BUT when Facebook fundamentally changes its privacy policy (or what’s left of it) no one cares and worse, no one even knows what the big deal is.

Note to “unlike” and stay away from the groups with funny names where you get to see the mystery image only if you “Like” the page.  Come on, are you really that naive?

Your personal information and surfing habits are being observed, calculated and quantified AND they are being sold to strangers.

The whole new search-able you

If you don’t put the correct privacy settings on those 900 Facebook photos; you know, those pictures of you drinking and making a fool of yourself at the various parties around campus, well, they are probably being seen by people outside of Facebook and worse; they are (or will become) search-able.

Now I know, that might not mean much right now because you probably have the usual “I don’t care what people think” attitude but remember this post in a few years from now when you suddenly don’t get that “dream job” even though you were completely qualified for it. 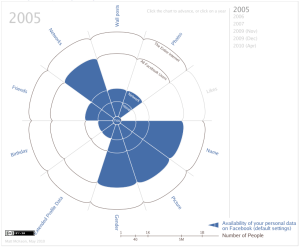 I know why I need Facebook in my life so I won’t be deactivating my account however, I have made changes to my privacy settings that suit my personal needs.  I do not accept Facebook gifts, game invitations or anything else that needs me to “Like” it in order to see it.

I suggest you do the same.

UPDATE: There are a few posts out there saying that it’s the “older folks” who are having a problem with the new Facebook privacy policy.  I ask you this: What do you think is the average age of today’s Facebook user?  If Facebook looses their trust – then they are history.

More food for thought: Recent stats indicate the Gen Y users are most likely to falsify their personal info on Facebook. What will Facebook do with a bunch of unusable information?

An unexpected flea market find today. Vintage woven rug. Has its tag and will have to do some research. Gladly! Cannot wait to find out! If anyone can help, I've included the tag with info. it had a Scandinavian flavor to me with the tulips but I can see it was made in Poland. . . . #fleamarketfinds #vintagerug #woolcarpet #woventextiles #poland🇵🇱 #brightcolors #homemade #kilimrug
I found this beauty today and I've wanted one for ages , , , , , #fleamarketfinds #potteryfinds #madeinengland🇬🇧 #1975 #hornseapottery #hornseaheirloom #collecting #gottafindtherest #vintagepattern
What do you want now... . . . #catsofinstagram #imsleepyleavemealone #catnap
My Hygge moment . . . . . . #hyggehome #hyggemoment #comforthome #zenmoments
I wrapped a gift using a fat quarter from fabric I designed in 2019 and printed with the help of Spoonflower and then used some leftover yarn for the bow 😉 . . . . . #sustainablewrapping #reusable #usewhatyouhave #someoneisgettingagift #fabricdesign
Actually did some water colour yesterday. Felt awesome. My fingers cooperated this time. . . . . . . . . #watercolorpainting #firstof2020 #frommyimagination #makeart #getbacktoit #artistsoninstagram #maketimeforwhatmatters
Mustard and Tarragon chicken . . . . #saturday #supperprep #yummyfood #wintersolstice2019 #comfortfood #simmer
Morning moon! . . . . . #earlymorning #moonsetting #winter
Some negative doodles . . . #procreate #negativedoodles #doodlepots #playtime #digitaldrawing
Part of a large doodle . . . #procreate #doodlesofinstagram #zentime #doodlesketch #patterns

Join Me On Social Media